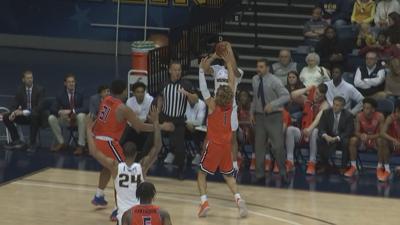 It has been 12 whole days since Murray State and UT Martin have met on the basketball court. Thursday night they will meet again, as the Racers will look to sweep the regular season series with the Skyhawks and improve to 5-0 in the Ohio Valley Conference.

The last two times these teams have met, the Racers won thanks, in large part, to three-point shooting. Last year in Martin, Murray State made 15 three-pointers, including a school record-tying nine by Tevin Brown.

Two weeks ago, the Racers made 10-of-15 from beyond the arc as Brown and Jaiveon Eaves combined to make eight. UT Martin Head Coach Anthony Stewart says that Racer shooting isn't the only item on his list of concerns.

"They're a really good team," Stewart said. "They're not a one-trick pony. Tevin does a really good job hitting threes, hitting big shots. Jaiveon hits big shots. They can beat you in a number of ways. They can go inside. They play very good defensively. They offensive-rebound well. They're opportunistic when you make a mistake. I was disappointed with our performance at Murray. I thought we should have played a lot better. We did show some initiative with our drive and not-give-up attitude, but it's going to be a different story here, I can promise you that."

Murray State and UT Martin will play at 7:30pm on Thursday night at the Elam Center in Martin.