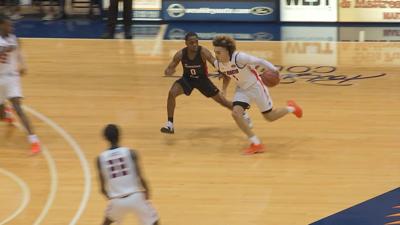 While most of the sports world is paused right now, there are scores of college basketball players who are trying to decide whether to stay in the NBA Draft or return to school for another season. That includes UT Martin rising junior Parker Stewart.

Parker already has his degree at UT Martin, even with two years of eligibility remaining. His coach and dad, Anthony Stewart, says Parker has signed with a certified agent, which allows him to use that agent to get information about his draft stock while still hanging onto his college eligibility.

Anthony Stewart said the focus the last few weeks for his team was finishing the academic year, and not much time was spent on basketball, even when it came to the biggest basketball decision of his son's life.

"I have not asked him, nor has he come to me for any advice," Anthony Stewart said when asked about Parker's decision. "He's a very intelligent young man with a good head on his shoulders. He makes good decisions. He's got a really good agent. That time will come. When it will be exactly, I'm not sure. We're building this team and signing guys that we want to be Skyhawks regardless of if Parker is here or not."

The deadline for players to withdraw from the draft and return to school was June 3rd. Wednesday night, the NCAA announced they were pushing back that deadline indefinitely.