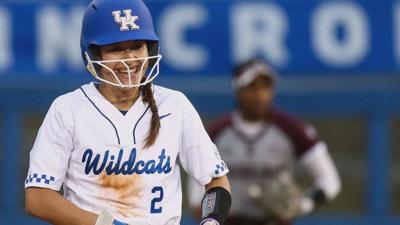 PADUCAH, KY -- Few people ever get to live out their childhood dreams. For Bailey Vick, getting to play softball at Kentucky was just that.

"My dad would send me pictures of young Bailey, and say, can you believe you are here," Vick said. "Wearing Kentucky across my chest makes me so happy. It's the coolest thing I have ever done."

Just like so may across the country, Bailey's season, her senior season, was canceled to to the outbreak of COVID-19.

"The Women's College World Series had been canceled, and that was tough," she said. "Because you play softball all year long and that was our ultimate goal. It was my dream to play there and it was like, not this year."

Vick had seen steady improvement throughout her career at Kentucky, but her senior year everything seemed like it was coming together. At the time the season was canceled, Vick was second in the nation with a batting average of .556.

She admits, the emotions over the last few weeks have been endless.

"My mom is supposed to throw me the first pitch on my senior day," said Vick. "It is hard not to be upset because it's a big part of my life and the rug was swept from under my feet."

But if you have ever met Bailey, you know one thing. No matter what the situation, a smile is always going to be on her face.

"I am proud of the legacy that I left," she said. "I know after every game, they will still notice my positivity, me smiling, and really notice my love of the game."

A love that makes it hard to turn down the possibility of a return next year thanks to a new ruling by the NCAA that allows seniors to return for an extra year. However, she has other plans in mind.

"The thought of another season in that uniform, I would die for," she said. "But I have to move on at some point."

Vick has accepted a job at an accounting firm in Lexington that starts at the end of the year, but says the game of softball will never be far away.

"My dream was to come here, and I am here," Vick said.