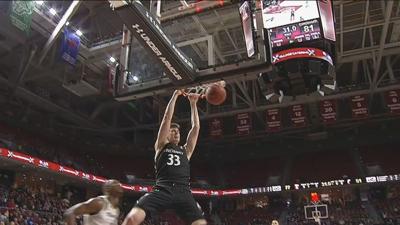 "There is really no downside to it," Vogt said. "So I thought why not."

The Graves County alum is taking advantage of the NCAA rule that allows players to declare for the NBA Draft and return to school following the combine or workouts with teams.

"I can put my name in and the worst thing I can get is feedback," he said. "Maybe if I get a teams attention, then they can start following me more during the season."

It is a spot that Vogt never thought he would be in, especially given what he has gone through over the last year after transfering to Cincinnati. In that time, he has gone from a role player at Northern Kentucky to starting all by one game for Bearcats this past season.

"It is a humbling experience to see my hard work come to fruition and just make a lot of progress," said Vogt.

Most of that progress can be traced to his offseason work ethic where Vogt turned himself from the skinny 7'1 center, to a player who can match the most physical players in college basketball.

That work paid off in a big way this past season. Vogt averaged 11 points and six rebounds a game for Cincinnati and had one of the top shooting percentages in the American Athletic Conference.

"You see yourself going against a top 25 team every night," said Vogt. "That definitely adds confidence to your game. Looking back, each year, I can see the growth I have had and I guess looking back on my freshman year, I would never have thought to be in this situation."

Which for Vogt, is why it is the perfect time to test the NBA waters, and at the same time fulfill a dream.

"It was always a dream," he said about playing professionally. "To be able to test the NBA waters and get some feedback is great and didn't think I would get to do it, but it is how it happened I guess."