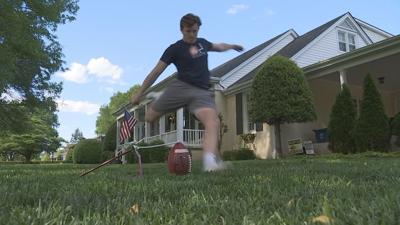 MARTIN, TN -- For everyone across the country, adjusting to a new normal is just a part of normal life.

The same can be said for athletes as they look for new and creative ways to stay in shape and improve their game while away from their normal routines.

Martin Westview kicker JT Carver is one of those athletes.

"It has been a real struggle," Carver said. "But I have found a spot to come out here and practice."

Carver was talking about his new practice field, home. He was also referring to his new goalpost, two trees in his side yard.

"I was throwing baseball with my brother and looked up," he said. "They looked like uprights to me."

When he isn't at home, Carver can normally be found practicing at Hardy Graham Stadium. Last season, on that field, Carver was almost perfect kicking for the Chargers.

However, being a kicker wasn't on his mind just a few short years ago.

"I wasn't playing football, I was a soccer player," Carver said. "My middle school coach pushed me in that direction. Once I got to high school, I didn't know how serious and how far I could take it."

Over the last year, Carver has garnered the attention of some of the biggest schools in the nation. Currently with a preferred walk-on offer at Michigan, Carver says he has heard from several division one powerhouse programs.

"If you would have asked me if I thought I would be at this point, I would not have believed you," he said.

Along the way, Carver has also had some guidance. Guidance from one of the biggest names in kicking in the southeast in former Tennessee place kicker James Wilhoit.

"I owe coach Wilhoit everything that I have accomplished so far," Carver said.

Wilhoit, who is best known for his game winning kick against Florida in 2004, runs his own coaching program, "Wilhoit Kicking Academy."

"You can really tell he loves the game," Wilhoit said of Carver. "He loves to go out and practice. Guys like that are always fueled to be better and better."

"He told me that if I take this serious, that I could play college football and go wherever I want to take it," said Carver.

And based off of his efforts to find those new ways to practice at home, that promise from Wilhoit will come true.

"This is an important window for him to prove to coaches that he has what it takes to compete at the next level," said Wilhoit.

Carver is currently on pace to graduate a semester early, this December. But said he isn't in any hurry to make his final decision on college.