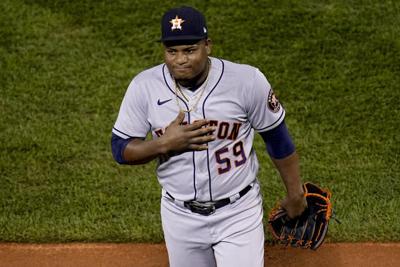 BOSTON (AP) - Framber Valdez gave the Houston Astros the start they were looking for.

The Astros lefty was perfect through four, took a two-hit shutout into the seventh and became the first pitcher in the 2021 postseason to finish eight innings on Wednesday.

That helped Houston beat Boston 9-1 in Game 5 of the AL Championship Series.

The Astros are one win from a second straight trip to the World Series.

Yordan Alvarez had three hits and three RBIs for the Astros.

They can clinch their third pennant in five years with a victory in Game 6 at home on Friday night.