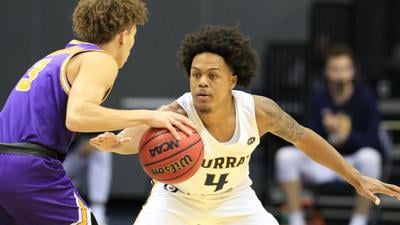 It is no secret Murray State Head Coach Matt McMahon has spent the first two months of this season trying to solve the puzzle of how to make his team the best it can be. For weeks, he has tinkered with rotations, playing time, and the starting lineup. If there is one move McMahon has made that has returned immediate dividends, it's been the insertion of freshman point guard Dionte Bostick into a starter's role.

It was a bit of a surprise when Bostick first started last week at UT Martin. It was surprising because in the first ten games of the year, Bostick hadn't played in seven of them, and had only played two minutes against Division I competition this season.

But when his number was called, Bostick was ready.

Against UT Martin, Jacksonville State, and Tennessee Tech, the freshman played 62 minutes, dished out 24 assists, and turned it over just four times.

When you play like that, you very quickly get the attention of your coach and teammates.

"I love the way Dionte plays," Murray State junior guard Tevin Brown said. "He makes it very easy. He's a downhill player. He can get to the goal at will. He knows when to kick the ball out whenever the whole team collapses in on him."

"I think he's had great command of the offense," Murray State Head Coach Matt McMahon said. "I think his decision-making has been really good. He's a very unselfish player. His ability to get in the paint and draw help has led to some easy scoring opportunities -- not only from three, but also has opened up some post up opportunities for KJ (Williams). Also, at the defensive end of the floor, he's brought great toughness and physicality at the front of our defense."

If you look at the numbers, it is undeniable the Racers have improved with Bostick in the starting lineup. While he's certainly not the whole solution, something has flipped these last three games.

Turnovers are down by almost half, and the assist-to-turnover ratio has more than doubled in games Bostick started.

The Racers are back at it Thursday at home against Tennessee State.