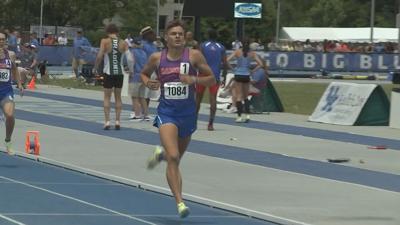 Benton, Ky. [July 12, 2022] – In its 37th year of honoring the nation's most elite high school athletes, Gatorade today announced Cade Flatt of Marshall County High School in Benton, Ky. is the 2021-22 Gatorade National Boys Track and Field Player of the Year. Flatt won the prestigious award for his accomplishments on and off the field, joining an impressive group of former Gatorade National Boys Track and Field Players of the Year who have combined for 19 gold medals and 14 National Championships.

The award, which recognizes not only outstanding athletic excellence, but also high standards of academic achievement and exemplary character demonstrated on and off the field, distinguishes Flatt as the nation's best high school boys track and field player. The Gatorade Player of the Year Selection Committee, which leverages experts including coaches, scouts, media and others to evaluate candidates, selected Flatt from more than half a million other student-athletes who compete in boys track and field nationwide.

Competition for the national award was fierce. Flatt topped the list of state winners in boys track and field who collectively boast an incredible list of accomplishments, including 25 who have volunteered with 2+ organizations, 8 returning state Gatorade Players of the Year in either Boys Cross Country or Boys Track & Field and 29 with a GPA of 3.75 and above.

"Competing at the most demanding event in the sport, Cade Flatt embodied pure mastery at the 800-meter distance (in 2022),” said Rich Gonzalez of PrepCalTrack. “Unbeaten both indoors and outdoors against scholastic competition, he recorded the No. 3 time in prep history to win a title at New Balance Nationals Outdoor and solidified his unprecedented outdoor ledger. While chasing one of the oldest records in the books, amazingly, Cade notched the No. 2, 3, 4, 6 and 7 outdoor times in history to rule a single track prep event like no other high schooler in history—he was absolutely masterful."

The 6-foot-1, 160-pound senior set a state record in winning the national championship in the 800-meter run at the New Balance Nationals Outdoor this past season. Flatt’s clocking of 1:46.48 was 0.03 seconds shy of the national high-school record that has stood since 1996. Flatt produced five of this century’s top six 800 times this spring and ran a 1:46.53 in a qualifying round for the 800 at the elite, all-ages USATF Outdoor Championships, finishing ninth overall and missing the final by one slot. Flatt won the 400-meter dash and the 800 at the Class AAA state meet, leading the Marshals to a third-place finish as a team. His best 400 time of 46.89 seconds ranked No. 25 nationally among prep competitors in 2022 at the time of his selection.

Flatt has maintained a weighted 4.13 GPA in the classroom. He has signed a National Letter of Intent to compete on an athletic scholarship at the University of Mississippi this fall.

“Gatorade understands how sports translate into lifelong skills, which is why we continue to recognize and celebrate student-athletes who are incredible role models for future generations,” said Gatorade Chief Marketing Officer Kalen Thornton. “Cade Flatt is an undisputed leader on the field of play and a role model in his community, which is why he earned the Gatorade National Boys Track and Field Player of the Year award.”

Gatorade has a long-standing history of serving athlete communities and understands how sports instill valuable lifelong skills on and off the field. Since the program's inception in 1985, Gatorade Player of the Year award recipients have won hundreds of professional and college championships, and many have also turned into pillars in their communities, becoming coaches, business owners and educators. Previous winners include a distinguished list of athletes, such as Peyton Manning, Abby Wambach, Jayson Tatum, Elena Delle Donne and many other sports icons.

To learn more about the Gatorade Player of the Year program, check out past winners or to nominate student-athletes, visit playeroftheyear.gatorade.com or follow us on social media on Facebook at facebook.com/GatoradePOY, Instagram at instagram.com/Gatorade and Twitter at twitter.com/Gatorade.

The Gatorade Company, a division of PepsiCo (NASDAQ: PEP), meets the needs of consumers who participate in sports and fitness, through brands that include Gatorade, Propel, Muscle Milk, and Evolve. The solutions they provide are driven by a deep understanding of the unique occasions and needs across athletic activity. Gatorade, their marquee brand, is underpinned by a 56-year history of studying the best athletes in the world, and sports nutrition research by the Gatorade Sport Science Institute, allowing it to provide scientifically formulated products that meet athletes' needs both on and off the field. For more information and a full list of products, please visit www.gatorade.com.

PepsiCo products are enjoyed by consumers more than one billion times a day in more than 200 countries and territories around the world. PepsiCo generated more than $79 billion in net revenue in 2021, driven by a complementary beverage and convenient foods portfolio that includes Lay’s, Doritos, Cheetos, Gatorade, Pepsi-Cola, Mountain Dew, Quaker, and SodaStream. PepsiCo’s product portfolio includes a wide range of enjoyable foods and beverages, including many iconic brands that generate more than $1 billion each in estimated annual retail sales.

Guiding PepsiCo is our vision to Be the Global Leader in Beverages and Convenient Foods by Winning with PepsiCo Positive (pep+). pep+ is our strategic end-to-end transformation that puts sustainability at the center of how we will create value and growth by operating within planetary boundaries and inspiring positive change for planet and people. For more information, visit www.pepsico.com.