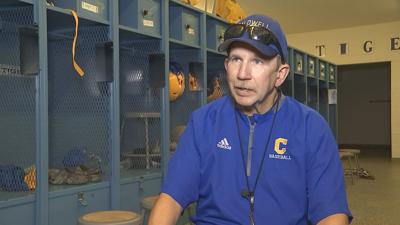 Caldwell County football coach David Barnes passed away Saturday morning at the age of 59. Barnes fell ill at his team's scrimmage last night at Hopkins Central High School. After being taken to the hospital last night, he passed this morning around 8:00am.

Doctors diagnosed Barnes with Parkinson's disease back in 2017. Despite his battle, he continued to coach and serve as Athletics Director at Caldwell County.

Barnes, a graduate of Caldwell County, took over at his alma mater in 2006, and had a record of 110-50 in his 13 seasons leading the Tigers. He led Caldwell County to the 2012 KHSAA Class 2A State Championship game, where they ultimately fell to Newport Central Catholic 30-26.

"Our thoughts and prayers to the Caldwell County and Barnes family on the passing of coach David Barnes. Longtime coach and athletic director and advocate for kids and football. Good man and contributor to education based athletics. RIP"

"Coach Barnes was a legendary coach. He always cared about every player and always went the extra mile to try and put his players in the best position to be successful. It was an absolute honor to be able to play under a coach that I knew had my back on every play no matter what happened. He believed in me even during the times I didn’t believe in myself, but even more so, he trusted me, and that’s what made him such a good coach. He was always there for me not only as a player, but also as a man. I hope I can play a season that would make him proud, even though I know he will still be watching. Rachel and Will, I am praying for you guys, praying for comfort and peace, I love you guys! My thoughts and prayers are with Princeton as well, especially the football team, during this tough time. Rest In Peace Coach."

"Coaches are all competitors," Mayfield football coach Joe Morris said. "We want to win. But when that game's over, we all understand what all coaches are going through, the grind and how much work they put in. I know David did as well. It was almost like if we'd win that game it was bittersweet, because I knew David lost. Bottom line, on Friday night, we wanted to beat one another, but after that game was over, we'd shake hands. We'd pull for Caldwell all the way through the playoffs, hoping they'd make a heck of a state championship run. He would do the same for me. He would text me every Friday night. We'd text each other every Friday afternoon wishing each other good luck on the game. I'm going to miss that."

Funeral arrangements haven't yet been finalized.