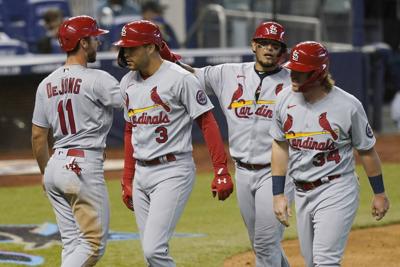 ST. LOUIS (AP) - St. Louis Cardinals catcher Yadier Molina was available as a "super emergency guy'' on Saturday, a day after the nine-time All-Star exited early with soreness in his right foot.

During his at-bat in the fifth inning Friday night against Cincinnati, Molina hurt his right foot and left the game.

Molina was not in the starting lineup Saturday with Andrew Knizner playing in his place.

The 38-year-old Molina raised his batting average to .339 after he homered and doubled in a 5-4 win over the Reds.