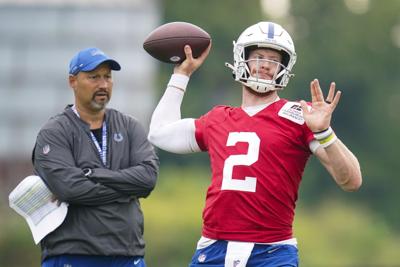 Coach Frank Reich made the announcement following his return to the practice field after missing all of last week's workouts because of a positive COVID-19 test.

Reich says Wentz will have surgery to remove a piece of bone Monday afternoon.

Reich says doctors found Wentz had broken the foot years ago, probably in high school, and that a piece of bone came loose when he hurt the foot last Thursday.

For now, Indy plans to use Jacob Eason as the starter.

Eason was a fourth-round draft pick in 2020 and has not appeared in an NFL game - regular season or preseason.