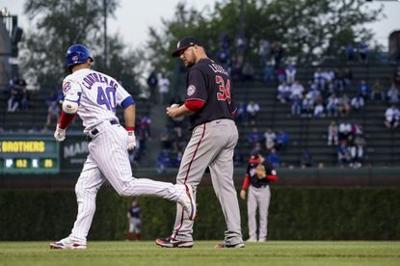 CHICAGO (AP) -- Willson Contreras, Jason Heyward and Javier Baez homered off Jon Lester in his return to Chicago, and the Cubs beat the Washington Nationals 7-3.

Lester and Kyle Schwarber, two key members of Chicago's 2016 World Series championship team, heard loud cheers all night long in their first game against their former team. Contreras put his arm around Schwarber's shoulders before he batted in the first inning, and the catcher gave Lester a brief hug when the pitcher was at the plate in the third.

Schwarber and Trea Turner homered for Washington, which had won three of four.