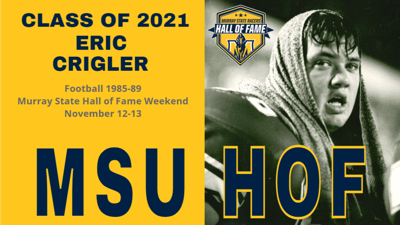 Murray State Athletics is proud to introduce the class of 2021 of the MSU Hall of Fame. Before the end of July, the eight members of the 2021 class will be released in alphabetical order, one day at a time. Check GoRacers.com and the social media channels of the Racers as we reveal the 2021 class.

The MSU Hall of Fame is proud to select former Racer football lineman, Eric Crigler, who was an All-Ohio Valley Conference and All-America lineman for the Racers from 1985-89.

A walk-on from Louisville’s Ballard High School where he played for Coach Bobby Redman. Crigler’s first contact with a person from Murray State University was assistant coach Bud Foster. From there, Crigler set the gold standard for Racer offensive line play that led him to being a part of Murray State’s Ohio Valley Conference championship in 1986 and eventually to being draft into the National Football League by the Cincinnati Bengals.

Crigler was a big part of the MSU offense under Coach Frank Beamer even though he never caught a pass or took the ball and ran with it. What he did was anchor the offensive line that produced productive tailbacks including Willie Cannon, Rodney Payne and Bill Bird. Crigler also protected MSU Hall of Fame quarterback, Michael Proctor.

An excellent student, Crigler came to MSU on an academic scholarship. He racked up the same impressive record in the classroom as he did on the gridiron. In 1989, he was awarded one of 25 NCAA Football Post-Graduate Scholarships, just the second Racer to receive it. The same year he earned the College Sports Information Directors Academic All-America Award and the OVC Scholar Athlete Award.

After earning his undergrad degree from Murray State University, Crigler went on to earn an MBA in Finance from the Indiana University Kelley School of Business, with honors.  He spent his career working as a Portfolio Manager/Analyst with Strong Capital Management in Milwaukee and opened his own firm Skyhawk Capital Management in Memphis. Crigler is currently serving Murray State as the chairman of the Board of Regents.

“I was excited and humbled by the news of my inclusion into the MSU Athletic Hall of Fame, an honor I never dreamed of when I arrived on campus as a walk-on player so many years ago,” Crigler said. “I have been truly blessed to cross paths with so many great coaches, amazing teammates, and the wonderful people of Murray State University, and I owe a debt of gratitude to them all. My life has been and continues to be greatly enhanced by my experience and association with Murray State University. Go Racers!”

Located in Murray, Kentucky, the athletics department of Murray State University is a NCAA Division I member and plays in the Football Championship Subdivision. The Racers have 15 programs including men’s teams for baseball, basketball, cross country, football and golf and women’s teams for basketball, cross country, golf, soccer, softball, tennis, track & field and volleyball, as well as a mixed gender rifle team. The Racers are a charter member of the Ohio Valley Conference and are currently one of just three original members from the conference's first season in 1948.