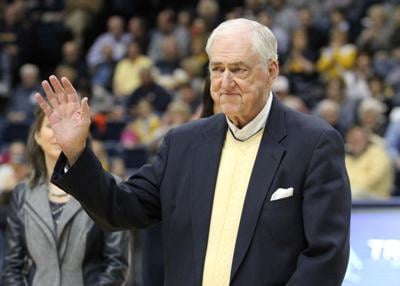 Ron Greene, who coached Murray State's basketball program from 1978-85, has passed away at the age of 82.

Greene played his college basketball at Murray State, leading the Racers in both field goal percentage and free throw percentage in 1962.

He held head coaching positions at Loyola and New Orleans, before taking over at Mississippi State for the 1977-78 season. Greene was the SEC Coach of the Year in 1978 after his one and only season in Starkville. That's when Greene returned take over the program at his alma mater.

Greene's Racers went 4-22 in his first season in 1978-79. From there, Murray State never looked back. Greene led the Racers to Ohio Valley Conference championships in three of the next four years. After leaving Murray State in 1985, he finished his collegiate coaching career at Indiana State in his hometown of Terre Haute.

Green wrapped up his career as a high school coach, spending 11 totals season as the head coach at Murray and Calloway County High Schools.

Murray State Head Coach Matt McMahon released this statement on Wednesday: "We are deeply saddened by the passing of former Murray State player and Hall of Fame Coach, Ron Greene. What an incredible legacy Coach Greene left on the Murray State campus and the Murray, Kentucky community. After earning the SEC Coach of the Year award in 1978, Coach Greene returned to his alma mater to rebuild the Racer basketball program. He established the foundation that has led to over four decades of championship tradition at Murray State. Our thoughts and prayers are with Ailene and the Greene and English families."