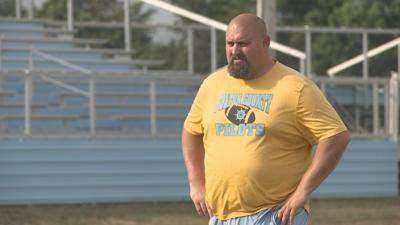 The excitement level for high school football returning may be at an all-time high. The Fulton County Pilots are one of those teams that have been hard at work. For Pilot Head Coach James Bridges, getting back on the field was something that almost never happened.

For Bridges, the last several months have seemed like an eternity -- and not for the reason you would think.

"I have been through a lot in the past three months," Bridges said as he choked back tears.

After undergoing back surgery at the end of last football season, he started having complications in early May.

"A bad infection set up in me and I had to go through a bunch to get right," Bridge said.

Several trips to Vanderbilt followed, with stays that lasted a week at a time.

"I was in Gods hands," Bridges said.

We have heard the players say how great it is to be back on the field after months away. For Bridges, there was a time he was told, he may never step on the field again.

"We put it in Gods hands and he worked it out for us," Bridges' son Broc said.

Bridges would recover, giving credit to those who took care of him, both in the hospital, and back at home with prayers and an outpouring of support.

"They wouldn't allow family or anything," Bridges said as he recalled his hospital stay. "Six days by myself. When you get messages at night, it takes care of it. They all called and checked on me."

Now, he is back on the field, with what he calls the perfect remedy.

"This is my medicine," Bridges said. "I am off all the medicine for this junk I had in me and this is it."

"It's just good to see him out here," Broc Bridges said. "It has been a rough few months."

"When I got up this morning, I felt great," James Bridges said, "because we were all out here on the field practicing."