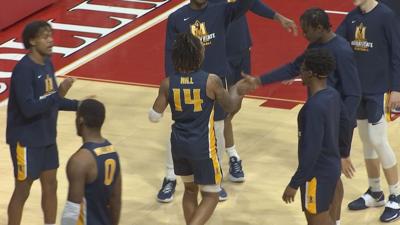 Murray State's Tevin Brown has reached the point in his Racer career where he is reaching the rarefied air in Murray State's record book. Brown's 19 points Tuesday at Illinois State pushed him past Jeffery Moss and Jonathan Stark into 18th-place on the school's all-time scoring list. If Brown is able to average around 20 points per game the rest of the season, he has a legitimate chance to become just the seventh-member of Murray State's 2000-point club.

Another Racer guard that had a big night at Illinois State is sophomore Juice Hill. Hill tied a career-high with 17 points, on 7-of-12 shooting from the field, and he made three three-pointers. Murray State Head Coach Matt McMahon says that kind of night happens because Hill laid the foundation for it as soon as last season was over.

"It's a product of the work you put in and the investment you make," McMahon said. "He's made a huge investment. From the first day of spring workouts, he's worked extremely hard. He's lived in the practice facility, studied the film. He's really bought in, is a lot of fun to coach, and you see it carrying over to the court now."

Next up, the Racers will head to Florida to play in the Naples Invitation starting on Monday. They'll open the the three-game tournament with a match-up against East Tennessee State.