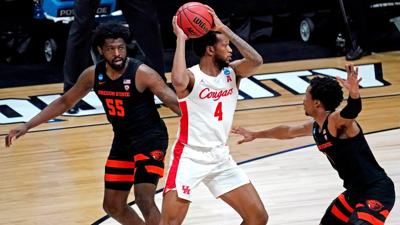 INDIANAPOLIS (AP) -- Houston overcame a blown 17-point lead to hold off Oregon State 67-61 in the NCAA Tournament and reach the Final Four for the first time in 37 years.

Quentin Grimes hit a tiebreaking 3-pointer with 3:21 left and Marcus Sasser finished with a game-high 20 points. Maurice Calloo scored 13 points to lead the 12th-seeded Beavers, who were trying to become the lowest-seeded team ever to make the Final Four.

Houston built its big lead behind a dominant defense but poor shooting after halftime allowed Oregon State to rally.