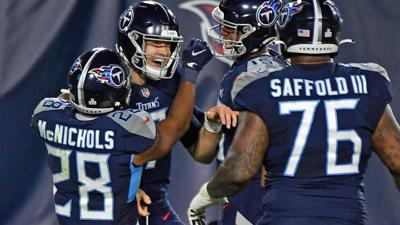 NASHVILLE, Tenn. (AP) -- The Tennessee Titans have a great knack for finishing games. Moving the ball after the opening kickoff is their big problem.

The Titans have scored only 20 points in the first quarter all season and have been shut out in two games. Worse, they've scored only once on an opening drive. They settled for a field goal against the Jets and have had a trio of three-and-outs to open games.

Titans coach Mike Vrabel says they have to get off to better starts and help themselves early in games. The Titans cannot afford to stall Sunday when they host Kansas City.