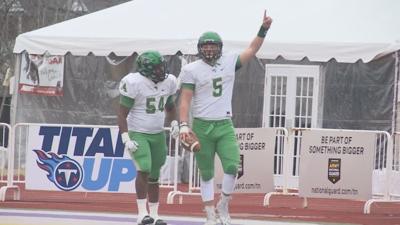 Lake County scored 16 points in an 18-second stretch of the fourth quarter to rally to beat Greenback 38-23 in the TSSAA Class 1A BlueCross Bowl.

Lake County's Tanner Snyder earned game MVP honors by rushing for two touchdowns, throwing for two more, and adding an interception return for a score that sealed the game in the fourth quarter.

The Falcons dominated not only time of possession, but also total yards. Lake County outgained Greenback 535 to 239, and also held the ball for 35 minutes and 42 seconds of the game.

Lake County senior running back Larry Tubbs left the game in the first half with what is believed to be a broken collarbone. Before the injury, Tubbs ran for 71 yards in the game putting him over the 2,000-yard mark for the season.

The win gives Lake County their third state championship, and their first since 1985.

Lake County finishes the season with a perfect 15-0 record.