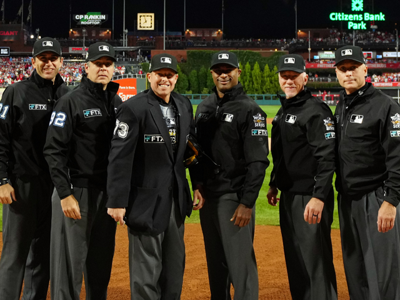 PADUCAH, KY -- Most kids that grow up playing baseball dream about playing on the big stage, in a World Series. For years, Mayfield native Tripp Gibson had that dream.

Only for Gibson, getting to the World Series took him on a different path. A path as an umpire.

And this past week he got that chance as a member of the umpire crew for this years World Series between the Houston Astros and Philadelphia Phillies.

“It's humbling,” Gibson said. “I am just a guy from Mayfield, KY and here I am in the World Series. So have I processed it, no.”

It’s easy to see why Gibson has a hard to processing the career defining week. A career that he started nearly two decades ago, first umpiring high school baseball games in the first region in west Kentucky, then college baseball, and eventually the minor leagues and major leagues where he made his debut in 2013.

It was because of that desire, help, and a little luck that Gibson got that opportunity this year. The highlight, getting behind home plate for game four of the series as the Astros threw the first ever combined no-hitter in World Series history.

A historic no-hitter that he didn’t realize until after it was over.

“When I hugged my wife probably an hour later, it was kind of overcome with emotion,” said Gibson. “I just worked my first plate job in the World Series, and it was a no-hitter. And I didn't know the historical significance of it, other than it was a no-hitter in the World Series, but we had the TV on after the game and they said it’s the first combined no-hitter and I was just like, I was a part of that. You know, I didn't throw the pitches. I didn't hit the ball, or try to hit the ball. I was a part of history and it is humbling.”

Gibson uses that word a lot. Humbling. Because it is.

And it’s because of his humble beginnings in a small town in Kentucky, with a big dream, that he hopes he can help someone else’s dream come true as well.

“If you really put your mind to it, and you really focus on what is important in your life, and not forgetting where you come from, you can really do about anything you want,” he said. “Doesn't mean there is not going to be road blocks, or obstacles, just you have to be willing to defeat those obstacles and go around them. There has been plenty of road blocks, tons and tons. I didn't just get to the World Series. If one kid, says out there, hey you encourage me, then awesome. Glad I am here, glad I am here.”