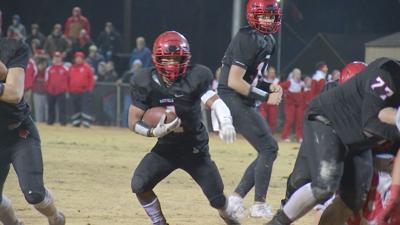 That's nothing new, as the Cardinals have played in the state championship game the last 10 out of 11 seasons.

Saturday's game against 13-1 Somerset will be coach Joe Morris' 12th trip to the state championship, and for him, nothing changes.

The 2020 class has advanced to the state championship game three of four seasons with the program, but they've fallen just short in their previous two, including 34-26 loss to Christian Academy-Louisville last year.

"This year we just want to get it done,” said Mayfield senior quarterback Jayden Stinson. “I mean, we've walked away empty handed both years, and we're honestly sick of losing it."

"We want to get the job done,” said senior wide receiver Alonzo Daniel. “We don't want to be one of the only classes without a ring, so we've gotta go Saturday, play hard and get a ring."

While Morris is quick to point out the accomplishments his senior class has amassed in four years with the program, he acknowledged they are still hungry for more.

"This senior class has done great things; they have not won a championship. I think probably in their minds, they don't want to be the first class probably in a pretty good while that hasn't won a state championship."

The last Mayfield class to fall short of winning that coveted championship was 2009. With one final shot at getting a ring, Stinson wants to make sure it stays that way.

"It's a different feeling knowing it's our last chance at this,” Stinson said. “There's no, 'Oh, you got it next year.' I mean, this is the year to do it."

Stinson and the Cardinals will get their final shot at the Class 2A State Championship when they meet Somerset at 1 p.m. on Saturday, Dec. 7, at Kroger Field in Lexington, Kentucky.