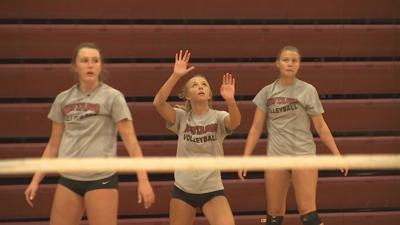 It has been an amazing run of dominance for the McCracken County volleyball team, as they are headed back to the state tournament after winning a seventh-straight region title.

The Lady Mustangs were back in the gym Wednesday afternoon as they prepare to face third-ranked Notre Dame in the opening round of the state tournament Friday. McCracken County has won games at state in each of the last two years, but Tim Whitis knows his team will have their collective hands full on Friday.

"You get ready to go and play the #3 team in the state, ranked 58th in the nation," Whitis said. "I mean, it's a really good team. So, I think there's some things you have to do mentally to be able to prepare for those games in order to be able to go up there and compete, and give yourself an opportunity to be able to win."

McCracken County will face Notre Dame at 2:30pm CST on Friday in Louisville.