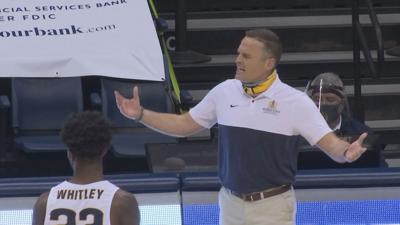 It is tough sledding right now for the Murray State basketball program. The Racers have dropped three in a row in Ohio Valley Conference play for the first time in four years, and they're off to their first 1-3 start in the conference in 37 years.

For sixth-year head coach Matt McMahon, he has some relatively recent history to draw from to help pull the Racers of their funk.

Back in the 2014-15 season, Murray State and sophomore Cameron Payne were coming off a CIT championship and expectations were sky-high. Early in the season, the Racers went to Xavier and got hammered by 27 points. That was part of a 2-4 start that had everybody on that Murray State coaching staff, including McMahon, scratching their heads.

After that 2-4 start, the Racers won 25-straight games and an OVC championship. Winning 25 games in a row is high bar to clear, but McMahon says he's able to take some lessons he learned from that year and apply them to this year's team, which includes self-reflection for both the players and coaches.

The Racers return to the floor on Thursday when they travel to Eastern Illinois.