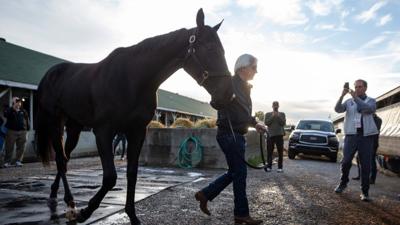 LOUISVILLE, Ky. (AP) -- Medina Spirit's victory in the Kentucky Derby is in serious jeopardy because of a failed postrace drug test.

Hall of Fame trainer Bob Baffert called a news conference to announce that Medina Spirit tested positive for an excessive amount of the steroid betamethasone that is sometimes used to treat pain and inflammation in horses. Churchill Downs immediately suspended Baffert and said Medina Spirit would be disqualified if the drug findings were upheld. Baffert denied all wrongdoing and promised to be fully transparent with the Kentucky Horse Racing Commission during its investigation.

Medina Spirit is Baffert's fifth horse known to have failed a drug test in just over a year. If he is disqualified from the Derby, second-place finisher Mandaloun will be declared the winner.