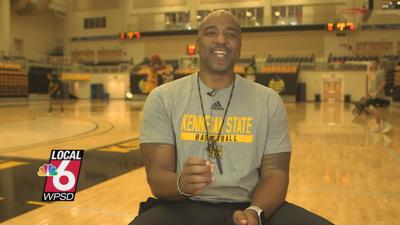 Amir Abdur-Rahim and Steve Prohm's basketball relationship goes back decades. Prohm was a young assistant coach at Southeastern Louisiana while Abdur-Rahim played there. Fast forward a few years, and the pair were both on Billy Kennedy's staff at Murray State. When Kennedy left Murray State for Texas A&M in May of 2011, Prohm was the next man up to lead the Racer program. Did Abdur-Rahim think Prohm was ready to run his own program?

"There wasn't a question if he was ready," Abdur-Rahim said. "We laugh about it all the time. We would be at practice at times when it was Steve, myself, and (former Murray State assistant) Isaac Chew. Steve would have the gold team, and Billy would have the blue team. We'd be going three possessions back and forth and flip it over. Every now and again, trying to win the game, Steve would just draw up a play that wasn't in our playbook. It worked almost every single time. It worked, but he'd get scolded because Billy would say, 'Hey, run our stuff!' Steve's preparation every day, how he approached his scouts, how he approached recruiting, just day-in, day-out stuff, there wasn't a question of if he was ready. It was just when will he get his shot. When he got his shot with that team, I think everybody that had been around that program knew he was going to be successful at it."