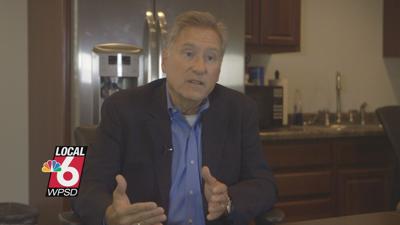 Dr. Randy Dunn was the president of Murray State University from 2006-2013. The first men's basketball that was hired on his watch was Steve Prohm in May of 2011. When we recently sat down with Dunn, he talked about the moment he watched Director of Athletics Allen Ward introduce Prohm as the new leader of the Racer basketball program.

"I was actually really excited for Steve," Dunn said. "He had been in the discussion all the way along as I'd been talking to Allen. Not wanting to put a thumb on the scale, but as things progressed, he clearly was the outstanding candidate. At the point of the naming press conference where he was able to take the podium, I felt really glad for him, really proud, and didn't want to do anything to step on his day in the limelight or get in the way. At that point, I'd been around intercollegiate athletics long enough, even though Murray was my first presidency, to know that his life had changed."

"If you're sitting there as a realist and understand how the world works, this was going to be one of, potentially, a number of coaching jobs for him and he never was going to be looking back. Being a little further along in my career and that type of thing, it was kind of interesting to think about the step he was taking. I was actually quite happy that we ended up where we did. That legacy, if you will, that was so strong at Murray had a great chance of continuing under Steve."

"When you look at what Billy Kennedy had accomplished, I started at Murray shortly after Billy came on board. When you look at the success and what he had accomplished, it wasn't just that longer Murray State legacy for great college basketball, it was also taking what Billy had done and trying to move on beyond that. I knew Steve was in a position to be able to do that."