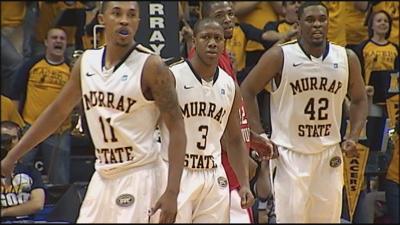 A collection of former Murray State basketball players will team up next week to take part in the eighth-annual edition of The Basketball Tournament, or TBT.

The team will be part of the 64-team, single-elimination event with a winner-take-all grand prize of $1,000,000. The Murray State alumni team has been dubbed "The Overlooked." They will play their opening round game Saturday, July 24th in Peoria, IL.

"The Overlooked" will be led by former two-time Ohio Valley Conference Player of the Year Isaiah Canaan. You can check out the complete roster by clicking here.

Terrence Miles was a longtime manager for the Murray State program. He'll be acting as one of the coaches for "The Overlooked" during the TBT. He says this group of guys still feels they have something to prove.

"Those guys who have won championships here as Racers, they're coming back, they're giving their time back to help the program," Miles said. "The reason they're called "The Overlooked" is because they don't think about us. We're a 6-seed. Same boat as in 2012. We won 31 games in 2012 and they still gave us a 6-seed (in the NCAA Tournament). Now we're in the same boat, a 6-seed. We're going to go out and prove we belong, that Murray State is not no low-tier program. Yes, Ja Morant has come through, and Cameron Payne is playing in the NBA Finals, and Isaiah Canaan, but Murray State is still a top-tier program in this country."

The team has also set up a GoFundMe account to help pay for travel for the team. If you'd like to donate and help the Murray State alumni, you can click here for more information.

Before the team heads to Peoria, they'll be meeting in Murray from July 19-23rd and holding daily open practices. Those practices will be open to the public and free to attend. We will give you those practices times as soon as they become available.