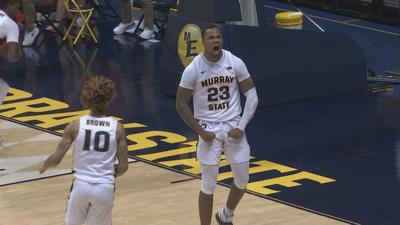 Taylor is the 15th player to win two OVC Player of the Year awards and first since Evan Bradds in 2016 and 2017. He is only the second Austin Peay player to achieve the feat, joining Otis Howard (1977 and 1978). Last year Taylor became just the fifth player in OVC history to win both OVC Freshman of the Year and Player of the Year awards in a career (joining Austin Peay's Bubba Wells, Morehead State's Ricky Minard and Murray State's Isaiah Canaan and Cameron Payne). In addition, he is only the third player in league history to be named first-team All-OVC for four-consecutive years, joining Western Kentucky's Ralph Crosthwaite (1955-59) and Eastern Kentucky's Nick Mayo (2016-19). Entering the OVC Tournament, Taylor ranks sixth nationally in scoring (21.7 points/game) and ninth in rebounding (11.0/game), making him the only player in Division I to rank in the Top 20 of both of those categories. He is also first in double-doubles with 19 (four more than second place), first in offensive rebounding (5.08/game), first in total field goals made (220), second in total rebounds (285), 20th in minutes played (37:01/game), 28th in free throws made (101) and 63rd in field goal percentage (52.3%). He has scored in double figures in every game this season, including scoring an OVC-best 38 points (including hitting a game-winning 3-pointer at the buzzer) at Eastern Illinois on January 9; the 38 points is the 14th-most scored by a Division I player this season. That marked one of five 30-plus point games of the season for Taylor (only six other OVC players reached that mark once). During the year he became Austin Peay's all-time leading scorer and rebounder and currently ranks third in OVC history in scoring (2,488) and eighth in rebounding (1,232); he is the only player in OVC history to rank in the Top 10 in both career categories. Taylor is also just the fifth player in OVC history with 2,000 career points and 1,000 career rebounds and during the year broke the OVC career mark for Player of the Week awards (17). He was named United States Basketball Writers Association (USBWA National Player of the Year on February 9, making him one of just three OVC players to ever win that award (joining Kenneth Faried and Ja Morant). Taylor is the only active Division I player with 2,000 career points and 1,000 career rebounds, including being the active rebounding leader and ranking second in scoring (by 17 points).

Murphy is the fourth player to win multiple OVC Defensive Player of the Year awards since the honor was first awarded in 2008-09. He joins Morehead State's Kenneth Faried (2009, 2010 and 2011), Eastern Kentucky's Corey Walden (2014 and 2015) and Tennessee State's Tahjere McCall (2016 and 2017). Murphy played a key role in helping Belmont win its seventh OVC regular season championship this season, finishing 24-3 overall and 18-2 in OVC play. From the point guard position (he stands 6'2" tall) he pulled down an impressive 8.1 rebounds/game, which was fifth overall in the OVC (first among guards), and led the OVC in defensive rebounding (6.5/game). He netted 53 steals, which ranks ninth nationally, while his 2.12 steals/game ranks the junior 27th among Division I players. He also had key late steals in wins at Murray State and versus Jacksonville State that help decide the game. For his three-year career he has 194 career swipes, just 19 away from joining the OVC career top 10 list. Murphy had multiple steals in 16 games, including matching his career-high with seven in a win at Tennessee Tech in January; that is the fifth-most in a game nationally this season. He also netted the first triple-double in Belmont's Division I history in February against Morehead State with 13 points, 12 rebounds and 10 assists; including that game he had six total double-doubles this season, the fourth-most among any OVC player. Since the start of last season, he is the only Division I player with 400-plus rebounds, 300-plus assists and 100-plus steals. His play helped Belmont rank first in the OVC in scoring margin (+13.3 points/game), second in turnover margin (+2.85/game), third in field goal defense (42.1%) and fourth in scoring defense (68.8 points/game). The only other Belmont player to be named OVC Defensive Player of the Year was Ian Clark (2012-13).

Broome helped Morehead State to a school-best 17 OVC wins (the second-most in OVC history) and the 20 overall wins mark for just the eighth time in school history (and first since 2015-16). He is currently one of three freshmen nationally to lead their teams in scoring (13.3), rebounding (8.7) and blocked shots (1.9). In the OVC he ranks first in blocks, second in rebounding, third in offensive rebounds (3.0/game), eighth in field goal percentage (57.6%) and 12th in scoring. Each of those (except scoring where he is second) are tops among all OVC freshmen. Broome has 10 double-doubles this year, the most by an Eagles freshman in more than 30 seasons; the 10 double-doubles ranks 15th nationally and second among all freshmen. Broome scored in double figures in 14 of his final 15 regular season games and had a season-best 25 points in a home win over Arkansas State in December. He has been named OVC Freshman of the week nine times (including winning or sharing the award each of the last five weeks of the season), which ranks third in league history (two off the record). He needs only 16 more rebounds to surpass Kenneth Faried’s MSU freshman record for rebounds (241); Faried went on to set the NCAA modern era rebound record with 1,673. Broome is the third Morehead State player to win the honor, joining Erik Brown (1998-99) and Ricky Minard (2000-01).

Entering his fifth season on the MSU bench, Spradlin had led the Eagles to back-to-back OVC Tournament appearances, including a quarterfinal appearance in 2019. Entering this year the team was predicted eighth in the OVC preseason poll but far exceeded expectations, winning a school record 17 Conference games (the second-highest total in OVC history) and finishing second behind Belmont (one game back). MSU also has 20 overall wins, marking just the eighth time in program history the team has reached that mark (and first since 2015-16). Along the way the team won 12-straight games, which tied the school record also held by the 1983-84 squad. At one stretch the team won seven-straight games by double digits, the first time that had happened since 1929-30. The team also completed a regular season sweep of in-state rival Murray State for first time since the 2002-03 season. When the Eagles played at Belmont on February 13, it marked just the 11th meeting in the past 25 years of Division I college basketball between teams with 12-game (or longer) winning streaks (Belmont entered having won 18-straight, Morehead State entered having won 12-straight), and just the fourth time that has happened in the regular season. Entering the postseason Morehead State ranks 13th nationally in blocked shots (5.2/game), 30th in rebounding margin (+6.2/game) and 3-point defense (30.2%), 31st in scoring defense (63.4 points/game) and 37th in field goal defense (40.4%); each of those is tops in the OVC. Spradlin is the first Morehead State coach to win the honor since Donnie Tyndall in 2007-08. Other MSU coaches to win the award are Jack Schalow (1975-76), Wayne Martin (1981-82 and 1983-84) and Dick Fick (1994-95).

Taylor, the OVC Player of the Year, was the top vote getter in earning his fourth-straight first-team All-OVC honor (making him one of three players in OVC history to accomplish that feat). He was one of five repeat first-team selections, as he was joined by Belmont's Grayson Murphy (10.8 points, 8.1 rebounds, 5.3 assists, 2.1 steals/game) and Nick Muszynski (15.2 points, 5.5 rebounds, 1.6 blocks/game) and Murray State's KJ Williams (15.3 points, 8.4 rebounds/game) and Tevin Brown (14.4 points, 5.8 rebounds, 4.4 assists/game).