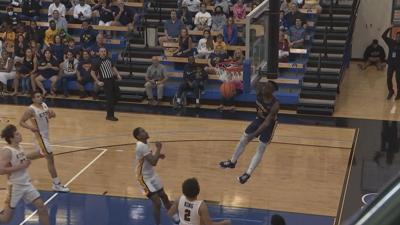 NAPLES, FL -- The Murray State Racers saw their three-game winning start to the 2021-22 season end with a 66-58 loss to the East Tennessee Buccaneers in the first round of the Naples Invitational. The Racers play their second game of the event Tuesday when they meet Long Beach for the first time in program history in a 2:30 p.m. Eastern Time tip at the Community School of Naples Fieldhouse in Naples, Florida.

On a night when an invisible force seemingly kept the ball from going through the net, the Racers (3-1) were led by KJ Williams who had a double-double with 18 points and 10 rebounds, while Tevin Brown added 12 points and Trae Hannibal 10 points.

The competitive first half began with the Bucs taking a six-point lead before the Racers answered with a 15-7 run to take the lead with 9:15 before half. The game was tied again 26-26 at the 4:00 mark before ETSU hit a 3-pointer for a 29-26 lead. DaQuan Smith hit the Racers' first and what turned out to be MSU’s only 3-pointer of the game to make a 32-29 ETSU lead at halftime.

ETSU opened the second half with a 14-6 run and made the Racers play from behind the rest of the way.

After tailing by as many as 16 points with 9:30 remaining, the Racers made a run late in the game to cut the lead to 61-57 with 1:36 left on a Williams shot in the lane. MSU never got the ball with a chance to tie the game.

The Racers never got on the right track on offense with a game shooting percentage of 42 percent (23-of-55) including a 1-of-16 night from the 3-point line. MSU also committed 17 turnovers and did outscore ETSU 44-28 in the paint.