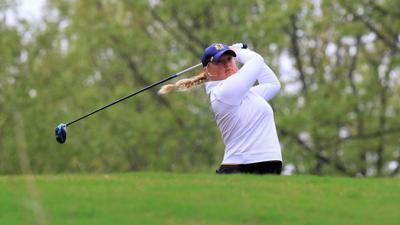 GEORGETOWN, KY (June 22, 2022) – One of the greatest, if not the greatest title match in the storied history of the Clark’s Pump-N-Shop Women’s Kentucky Amateur took place today at Cherry Blossom Golf Club. Payton Carter (6) edged reigning champion Rylea Marcum (1) 2&1 in a match where the finalists’ best-ball score would have been -11 thru 17 holes.

Carter, a senior for the Murray State Racers, found herself 2 DOWN after the 3rd hole following a couple of early birdies from the 2021 champion. Carter immediately responded with consecutive birdies on the 4th and 5th holes to tie the match and got the lead for the first time on the 7th hole when another birdie got her 1 UP. Marcum was able to convert a birdie opportunity on the 9th hole to send them to the back nine at the same spot they were at the start of the match – all even.

Matching pars on the 10th and 11th holes gave way to another run of birdies from Carter, as she won the 12th and 13th holes to go 2 UP for the first time in the match. Once again, however, Marcum showed her resolve and promptly made two straight birdies of her own on the 14th and 15th holes which tied the match back up. A critical bogey from Marcum on the par-three 16th, one of just two bogeys made in the entire match, gave Carter the lead back heading to the 17th. With her sixth birdie of the day, Carter ended the match at that point giving the newly crowned 2022 champion a thrilling victory over the 2021 champion.

“I knew I had to make birdies all day to beat (Rylea),” Carter said after the match. “I focused on one shot at a time throughout the day; hit the fairway, hit the green, make the putt. Rylea didn’t miss a putt to start the day, but I was able to get a few holes on her and hold on. It’s been a great year, and this win just adds to it. I’m thankful for the amazing golf I’ve been able to play and for the opportunity to be the champion of this event.”

The tournament’s Senior Championship Division was also decided on Wednesday, where Robin Brockman (2) of Versailles defeated Teena Freibert (1), also from Versailles, with a 5&4 victory. Brockman was 1 UP after 10 holes but won four holes in a row from 11-14 to close the match in style.

Off the golf course, the tournament committee announced that Abigayle Buchanan and Kylah Lunsford are the recipients of this year’s Dorothy Waters Scholarship. This recognition is for participants not yet 18 years old who demonstrate exceptional integrity, honor and sportsmanship. Buchanan, Lunsford and their families will use the money from these scholarships to defray the expenses of tournament golf.

The Kentucky Golf Association extends its thanks to Luther Conley, PGA General Manager and the entire staff at Cherry Blossom for their assistance and hospitality throughout the championship. The KGA also lends its appreciation towards each player and spectator who made the 95th edition of the tournament a special one.