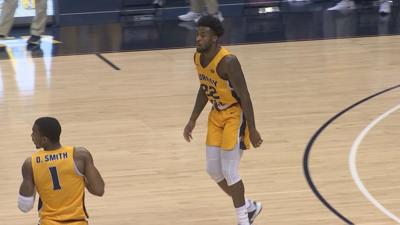 From 2009-11, Donte Poole was a role player for the Murray State basketball program. In his first three years with the Racers, Poole played in 84 games, starting just two, while averaging about 15 minutes and five points per game.

Heading into his senior year, that historic 31-2 season in 2012, something clicked for Poole. Watching him early in the season at the Great Alaska Shootout, it was obvious how much he had improved over the summer. As the season progressed, Poole ended up as an All-Ohio Valley Conference player, and earned the OVC Tournament Most Valuable Player award.

While you don't want to throw all those accomplishments at the feet of current Murray State junior guard Brion Whitley, in terms of how much he has improved since we last saw him play, Whitley has certainly checked that box.

Whitley has started every game this season for the Racers, after missing all of last season with an injury. Tuesday night against Austin Peay, he had one of the plays of the night with his chase-down block that led to a Tevin Brown three-pointer. Whitley tied his career-high with ten points, all of which came in the first half.

He has been active and impactful early in the season. If you weren't paying attention, his play has probably caught you by surprise. Matt McMahon isn't surprised, but is definitely thrilled with what he's seen so far.

"I thought he was aggressive driving through the gaps of their defense, and got to the rim and finished plays in the first half," McMahon said about Whitley's performance against Austin Peay. "I thought he was terrific defensively for us. I thought he was really locked in and played very much up to the standards we expect from him. I was happy for him to see him have that success. It's the first success he's had on the court in over a year having missed last season. Just thrilled for him. I thought he had a fantastic performance."

The last time Whitley scored ten points in a game was two seasons ago at Southern Illinois. The Racers will head to Carbondale to take on the Salukis on Friday night.