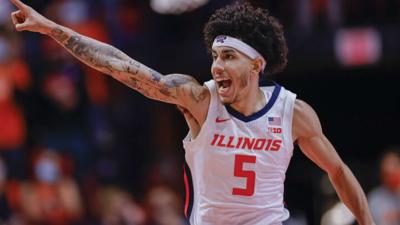 KANSAS CITY, Mo. (AP) - Kofi Cockburn had 23 points and 13 rebounds, Alfonso Plummer hit seven 3-pointers and added 21 points, and No. 14 Illinois held off pesky Kansas State 72-64 on Tuesday night in the consolation game of the Hall of Fame Classic.

Plummer finished 7 of 9 from beyond the arc, and the Illini (3-2) went 12 of 26 from 3 as a team, as they bounced back from a 71-51 blowout loss to Cincinnati in the semifinals to avoid their third consecutive loss.

It came at a cost, though: Trent Frazier, who scored 23 points against Marquette but was held scoreless by the Bearcats, hurt his left knee midway through the second half. The Illini guard was 0 for 5 from the field but had five assists at the time.

Markquis Nowell scored 19 points and Nijel Pack had 15 for the Wildcats (2-2), who committed just four turnovers for the entire game. Ismael Massoud added 13 points after going 0-for-everything against Arkansas in the semifinals.

There were plenty of subplots to the first meeting of Illinois and Kansas State in 21 years.

Illini coach Brad Underwood grew up in McPherson, Kansas, and played two seasons for the Wildcats under Jack Hartman. He later returned to Manhattan to spend six seasons as an assistant to Bob Huggins and Frank Martin.

As for Weber, he spent nine seasons coaching the Illini, leading them to two Big Ten titles and the national championship game in 2005. The Illini haven't won a regular-season conference championship since he left.

There also was Kansas State guard Mark Smith, who began his career at Illinois before a pit stop at Missouri, making him doubly loathed by the orange-clad Illini faithful. But he ignored their boos to score a couple early baskets and dish out a couple of assists, helping the slow-starting Wildcats stay within 34-31 at halftime.