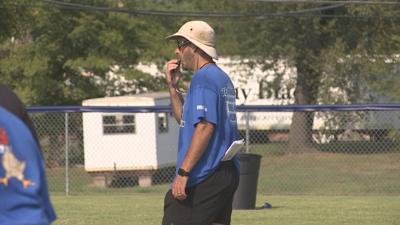 One of the great rivalries in the the history of Kentucky high school football will be renewed Friday night when #1 Mayfield tangles with #5 Paducah Tilghman for the 106th time.

Mayfield has owned this rivalry for more than a decade, beating the Blue Tornado 13-straight times. Tilghman's last win in the series came back in 2005. After impressive wins over McCracken County and Louisville Holy Cross, the Blue Tornado are hoping to ride that momentum to their first 3-0 start since 2003.

Tilghman Head Coach Jonathan Smith has been a part of this rivalry since he was seven years old, and he knows this game is about a lot more than just football.

"It's the only thing I've ever known is Mayfield and Tilghman," Smith said. "I've had the luxury of being on both sides of it. You know, obviously as a head coach of Paducah Tilghman now, it means a whole lot to me from the standpoint of making sure our guys understand what it's all about -- not just to our team, but to our community, both communities. You know, I think that's the most important thing; that's the message we've been trying to send this week."

They'll kick off Friday at 7:00pm at McRight Field.