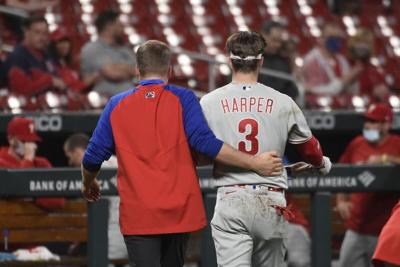 ST. LOUIS (AP) - Phillies star Bryce Harper was hit in the face by a 96.9 mph fastball and left Philadelphia's game against St. Louis.

Harper was drilled in the left cheek by left-handed reliever Genesis Cabrera's first pitch in the sixth inning.

The All-Star slugger picked himself up and walked off the field, blood dripping from a cut on the side of his nose.

Cabrera drilled Didi Gregorius with another fastball on his next pitch.

Phillies manager Joe Girardi came out of the dugout to argue with plate umpire Chris Segal and was ejected.