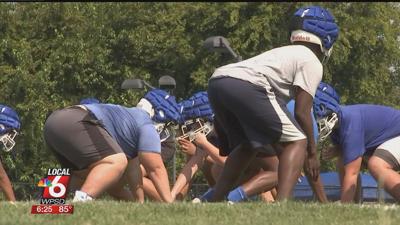 Four days after the Kentucky High School Athletic Association Board of Control voted for practices to begin today for fall sports, Kentucky Governor Andy Beshear said he would not overturn the KHSAA's ruling.

After the vote last week, Beshear said he was surprised the KHSAA was deciding to begin games as early as the week of September 7th. On Monday, while Beshear said he wouldn't go against the KHSAA, he didn't believe their decision was "wise".

"If we're going to defeat this virus, we're going to need people other than me, all over Kentucky, taking responsibility to make good and wise decisions," Beshear said. "I have concerns, that by starting with some of the most high-contact sports, we risk a shortened season. We risk what I think are successful plans to get our kids back in school. We risk every other sport that's going to follow. But we can't be making every decision for what's best for folks out of the governor's office."

Football practice began at Paducah Tilghman Monday afternoon. When it started, there was uncertainty when their season would begin. By the time practice was over, the Blue Tornado knew all of their attention was on their September 11th opener with Graves County. Tilghman Head Coach Jonathan Smith was excited by the governor's decision, but it also gave him some immediate concerns about his team.

"I'm elated we get to play," Smith said. "But in another way, I'm looking at that internal clock in my head that says, 'Hey, in 18 days, we play a full-pad ball game.' This is the first time we've even been able to be out here in helmets with our full 78-man roster. There's a lot of things that us, along with everybody else, we've got to work on and prepare for in the next three weeks."