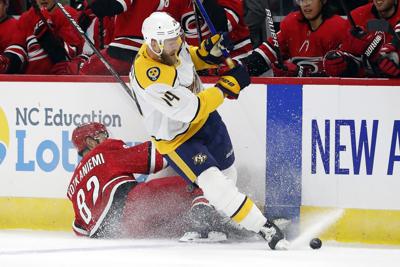 NASHVILLE, Tenn. (AP) - The Nashville Predators have signed defenseman Mattias Ekholm to a four-year, $25 million extension keeping him under contract through the 2025-26 season.

The Predators announced the contract Wednesday at a news conference.

Poile also says they couldn't be happier to get this deal done before the season opener Thursday night against Seattle.

Poile said Ekholm brings size to the blue line along with being a mentor.

Ekholm was drafted by Nashville in 2009. He has played his entire career in Nashville.