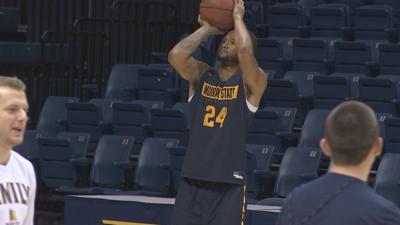 MURRAY, KY -- Heading into this season, there were a lot of questions about this year’s Murray State basketball team. Some of them, we already know the answer to, but others we are still trying to figure out.

For head coach Matt McMahon, he is in that situation as well as he sees these first couple of games as a feeling out process, especially when it comes to rotations and who is going to contribute.

“It is challenging from the standpoint that eight of our 14 guys didn't play last year,” McMahon said. “So you are trying to figure out the best rotations, who needs certain amount of minutes, what combinations, what worked together best. Practice shows you a lot, but there is nothing like playing in front of eight thousand people.”

Of course, some of those lineups may change whether or not senior forward Darnell Cowart will be able to return from off-season surgery.

“I am not going to play him until I feel like he is close to one hundred percent,” said McMahon. “We will see how he handles practice the next couple of days heading into the weekend and make a decision. But it doesn't change what we do at all. “

Over the years, the Racers have had some pretty impressive debuts from first year players.  Most notably under Matt McMahon, you have Jonathan Stark a couple of years ago against Illinois State, 19 points, and of course the game winner. Then you have Tevin Brown last year scoring 17 points on five three pointers. So another question we have for Saturday, is which player shows out in his debut.

Murray State will tip-off against Southern on Saturday night at 7:00pm at the CFSB Center.