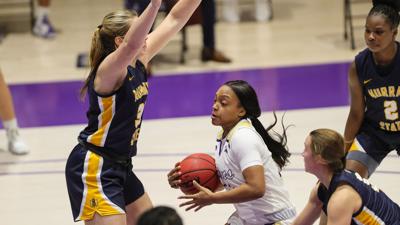 FLORENCE, AL -- For the fourth time in four games, the Murray State women's basketball team scored 80-plus points as it picked up its first road win of the season, 94-80, against North Alabama Tuesday night in Florence.

The 94 points was a season high for the Racers who are now averaging 80.6 points per game. The two teams came out of the gate trading buckets and swapped the lead a combined 15 times in the first half to go along with eight ties. However, in the final 2:01 of the first half, the Racers went on an 8-0 to end the stanza, taking a seven-point lead into the locker room that it would never relinquish. Murray State went on to lead by as many 17 in the second half, en route to a 14-point win.

In their three wins so far this season, the Racers are defeating their opponents by an average of 20.7 points per game. Four players reached double-digits Tuesday for the Racers, who are now 3-0 when four or more players score 10- plus points in a game.

Katelyn Young led all scorers in the game with 22 points and tied Hannah McKay for the game-high in rebounds with seven. McKay and Alexis Burpo came off the bench to score 15 points each Tuesday, while Manna Mensah added 16. Burpo also led the Racers with five assists in the game, while Laci Hawthorne turned in a solid stat line of eight points, six rebounds, three steals and one assist.

With non-conference play behind them, the 3-2 Racers will return home to host Austin Peay on Saturday afternoon.