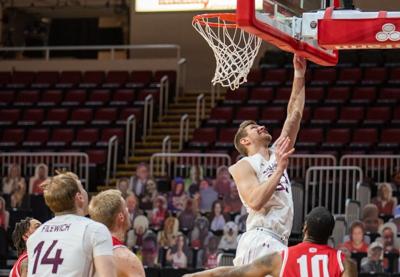 SIU (9-7, 3-7 MVC) trailed by six at halftime, 43-37, but owned much of the second half, building up a lead as big as nine. Bradley (10-11, 4-8 MVC), the two-time defending Arch Madness champions, fought right back and nearly stole the game for SIU. Yesterday, it was Bradley that made the plays at the end to withstand SIU's rally. Today, the Salukis held Bradley to 33% shooting in the second half (17% from the 3-point line) and made the plays down the stretch to hold off the Braves.

SIU led by nine with eight minutes to go. Bradley responded with a 13-4 run to tie the game with less than 90 seconds to play. With the game tied in the final minute, the Braves got the ball back with a chance to take its first lead since early in the second half, but SIU's defense forced a wild shot. On SIU's final possession with the shot clock turned off, Lance Jones got downhill and drew a foul with 2.3 seconds left. He made the second of two free throws to give SIU the lead, and Terry Nolan Jr.'s 35-footer at the buzzer came up short to give SIU its second win in the last three games.

"I talked to Lance last night," Mullins said. "He had the ball in his hands a couple times in late-game situations, and I told him the ball is going to continue to be in his hands. I trust him. Last night, he settled for a long three at the end of the game. Tonight, he attacked the basket and got to the free throw line. Everyone in the program has confidence in Lance."

Southern Illinois flipped the script on its recent second-half defensive woes. SIU had allowed eight-straight opponents to shoot 50% or better in the second half; but tonight, SIU held Bradley to 5-for-18 from the field in a crucial 13-minute stretch to turn a six-point halftime deficit into a nine-point lead. After allowing 43 points in the first half on 58% shooting, SIU held Bradley to just 17 points in the first 15 minutes of the second half.

"Lance started the second half great with his ball pressure and intensity, and that's contagious with our team," Mullins said.

Offensively, SIU used its lethal 3-point shooting and an incredibly balanced scoring attack to have their way with Bradley's defense. Four players scored in double-figures for SIU, led by Trent Brown's 14 points and four 3-pointers.

"Trent is one of our toughest kids," Mullins said. "He's mentally tough. He accepts every challenge. He guard the other team's best player a lot of the time. He's also, with Marcus out, expected to pick up his scoring. It was good for him to see the ball go in a couple times. He has to be aggressive like that. He's a great shooter. He took 10 threes, and nine of them were good shots. That's what we want from him."

Ben Harvey scored 12 points on 5-of-7 shooting. Anthony D'Avanzo had 10 points and six rebounds. Steven Verplancken Jr. had 11 points, and Kyler Filewich had yet another near-double-double with nine points and nine rebounds.

Playing without All-MVC forward Marcus Domask, who missed his sixth-straight game with a foot injury, Southern's ball movement was outstanding, and the Salukis ended up with 18 assists: four from Jones, four from Brown, four from Harvey, three from Filewich and three from Dalton Banks -- all freshmen or sophomores.

"We have a lot of other really good players besides Marcus, and they have a lot of years left to wear the Saluki jersey," Mullins said. "We're looking forward to growing with them and continuing to get them better."

Defensively, SIU locked in on Bradley stars Nolan Jr. and Elijah Childs. In yesterday's SIU loss, Nolan and Childs combined for 38 points on 11-of-20 shooting. Tonight, SIU held them to 14 points on 5-of-18 shooting. SIU did especially well on Childs, holding him to a season-low seven points on 2-of-10 shooting.

"We needed to do a better job on those two guys today if we wanted to be successful," Mullins said. "Kyler (Filewich) did an unbelievable job on Childs. With Nolan, he's such a talented scorer, we had to pressure him a little more. Lance and Steven did a pretty good job of that."

SIU, the ninth-youngest team in the nation according to KenPom, has won two of its last three games after a 21-day COVID pause that was in between a six-game losing streak. With games from the COVID pause being rescheduled, SIU is in the midst of playing five games in nine days, which resumes Wednesday night at Missouri State before the Salukis host Illinois State next weekend at Banterra Center.

"We have to continue to get better every day," Mullins said. "I think we're a better team today than we were (last week) vs. Northern Iowa and (two weeks ago) at Indiana State."

NOTES: SIU improved to 2-0 when it plays on Super Bowl Sunday. The Salukis earned a road win at Creighton in 2004, and a road win at Bradley today ... Kyler Filewich has scored 9+ points in six-straight games. Filewich has nine rebounds in three of his last five games ... Steven Verplancken Jr. has scored in double-figures in three-straight games and four of his last six ... SIU's second-half field goal percentage defense (held Bradley to 33.3% shooting) was its best against a Division I opponent this year (held Division II Quincy to 31% in early December) ... Filewich tied his career highs with 9 rebounds and 3 assists ... Ben Harvey tied his career high and set his SIU high with four assists ... SIU improved to 5-1 this year and 13-2 under Mullins when it records 15+ assists.