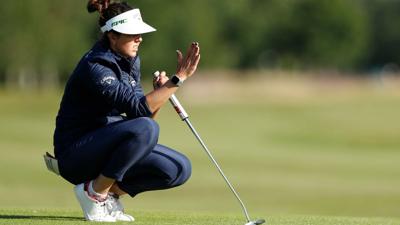 PADUCAH, KY -- Emma Talley came so close to picking up her first win on the LPGA Tour after falling in a two hole playoff to Pajaree Anannarukarn in the final round of the ISPS Handa World Invitational on Sunday afternoon.

Talley and Anannarukarn both finished their rounds with a 3-under 70 that forced the playoff.

Both would par the first playoff hole, before Talley found trouble on the second, finishing with a bogey. Anannarukarn would go on to make a six-footer for par and pick up the win in Northern Ireland.

"I have been saying it for a while, I am back," Talley said after the round. "Some people never win their whole career. So, I can't really predict a win but I can predict that I am going to play well for a long time. I hope that I have a lot more chances like this."

Talley did have to battle through adversity during the back-nine. She would bogey the 12th, 14th, and 15th holes to drop two shots behind the leaders.

She would then birdie the 17th to move back into a three-way tie for the lead with Anannarukarn and Jennifer Kupcho.

The second place finish is Talley's best since joining the LPGA Tour full time back in 2018. It is also her second top-5 finish in the last month after missing the cut in seven out of the first ten events this season.

"About two months ago I wanted to quit," Talley said. "I have come a long way in the last six weeks. My dad text me today and said you have so much to be proud of. Six weeks ago, you were ranked 144 and you wanted to quit. Now you are ranked in the top-50 in the world and you want to do this the rest of your life. It is just all perspective. I have a lot on my mind right now and I can't wait to go play next week and try to win again."

Talley will next participate in the Women's Scottish Open starting on August 12th. With a good finish, she can also qualify for this years Women's British Open at the end of the month.