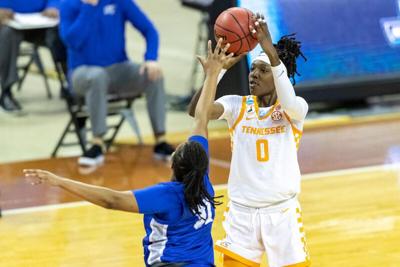 AUSTIN, Texas (AP) -- Rennia Davis scored 24 points and grabbed 14 rebounds and No. 3 seed Tennessee used a dominant second half to beat 14th-seeded Middle Tennessee 87-62 in the first round of the women's NCAA Tournament.

The Blue Raiders looked like they could pull off a shocker early on when they were tied with the Lady Vols at 39 at halftime. But a bid to become the first No. 14 seed to win an NCAA Tournament game was worn down against Tennessee's size and length.