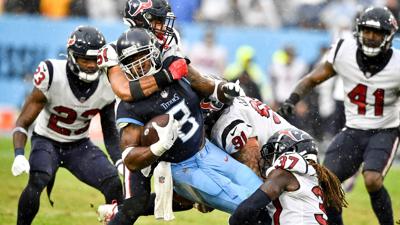 NASHVILLE, Tenn. (AP) -- Tyrod Taylor ran for two touchdowns and threw for 107 yards and the Houston Texans snapped the NFL's longest active skid by beating the Tennessee Titans 22-13 on a wet and rainy Sunday.

The Texans came in having lost eight straight since winning their season opener and hadn't scored a TD on the road since Sept. 19. Desmond King had two of the Texans' four interceptions. Three of those came in the fourth quarter to snuff out the Titans' attempted rally.

Houston turned those and a fumbled punt into 13 points.