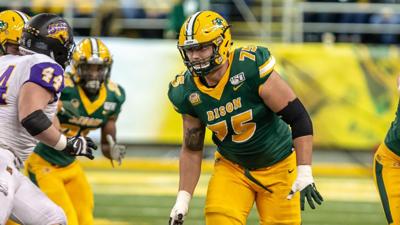 NASHVILLE, Tenn. (AP) -- The Tennessee Titans hope to make up for their first-round mistake a year ago with the selection of offensive tackle Dillon Radunz of North Dakota State with the 53rd overall pick in the NFL draft.

The Titans traded away offensive tackle Isaiah Wilson in March after drafting him at No. 29 overall in 2020. Wilson played four snaps before being suspended, then placed on the injured reserve/non-football injury list. Wilson was drafted to help to replace Jack Conklin who left as a free agent for Cleveland.

Now the Titans hope Radunz can help replace veteran Dennis Kelly who was a salary cap casualty in March.