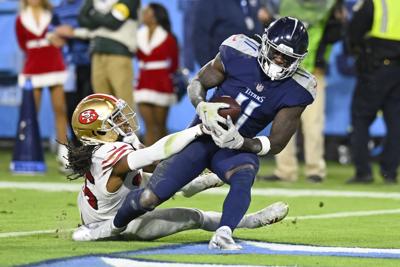 The Titans are a win or a Colts' loss away from clinching their second straight AFC South title despite losing three of their past four games to drop from the AFC's top seed to third.

Indianapolis plays Arizona on Saturday. Ryan Tannehill threw for just 40 yards in the first half but finished with 209 yards and a TD for Tennessee.

A.J. Brown caught 11 passes for 145 yards hours after being activated off injured reserve, and his 18-yard TD catch gave Tennessee a 17-10 lead early in the fourth.