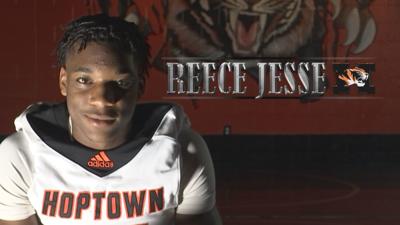 Local high school football coaches voted Hopkinsville's Reece Jesse as the #7 Player of Gridiron Glory in 2019. Here's what some of those coaches said about him:

McCracken County's Marc Clark: "He is a Dez Bryant, Devonte Parker type of deal, where he is just a jump-ball guy. There is not a lot of question of him making a play. It is scary to think about how much more he can improve."

Trigg County's Coby Lewis: "I was looking on Twitter and saw some pictures and said, 'Coach Dawsett, who is this guy?' It is one of those things that there is not much you can do about it. If the ball is in the air he is going to go get it. When you got that kind of length and that kind of speed, you know you are going to be off the charts."

Crittenden County's Sean Thompson: "I have seen him at 7-on-7's, and highlights on Twitter and stuff like that from the summer. He is a mismatch for everyone who lines up against him. It's his want to go get the ball. When it is in the air,  it is his. As a coach, that is a guy you never want to end up going against, but having him on your team is a guy that you want because you know you got a big play waiting to happen."