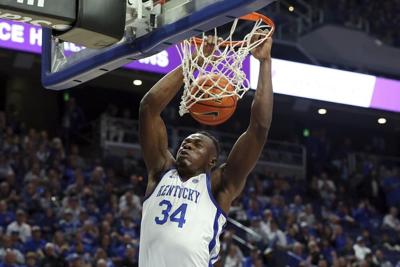 The Wildcats (4-2) easily recovered from an 88-72 loss at No. 6 Gonzaga Sunday and won their 23rd consecutive home game against an unranked opponent.

Ten players scored for the Wildcats, with three starters reaching double figures. Oscar Tshiebwe had a second double-double of the season with 16 points and 15 rebounds.

Antonio Reeves finished with 20 points. Toppin did most of his scoring in the second half with 12 points. Jarius Hicklen led the Ospreys (1-4) with 17 points.