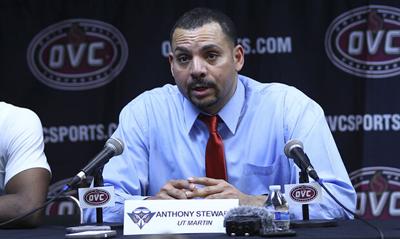 MARTIN, TN — UT Martin men's basketball coach Anthony Stewart passed away on Sunday afternoon according to a release sent from the university.

No details were released surrounding the nature of his passing.

“We are stunned to hear this tragic news,” Skyhawk athletic director Kurt McGuffin said. “Coach Stewart was a true leader to every one of the young men he coached. He emphasized the meaning of a college degree and instilled professionalism in each of his student-athletes. We ask for privacy during this difficult time.”

Stewart took over as head coach of the Skyhawks in 2016 and was about to head into his 5th season with the school.

Throughout the night following the news of his passing, tribute began pouring in about Stewart.

"The OVC extends its heartfelt sympathy to Coach Stewart's family and the UTM community," said OVC Commissioner Beth DeBauche. "Coach Stewart will be dearly missed throughout the OVC, not only as a coach, but as a friend to many. Anthony was a thoughtful leader who made all of us that worked with him better by his continued focus on the student-athletes and their well-being. He was the consummate teacher committed to developing young men of character."

"Just got some awful news about my man Anthony Stewart passing away," said former Southern Illinois head basketball coach Chris Lowery. "Please pray for his family in this very stressful time for them. No words can explain how hurt I am because he was more than a friend, but a brother to me."