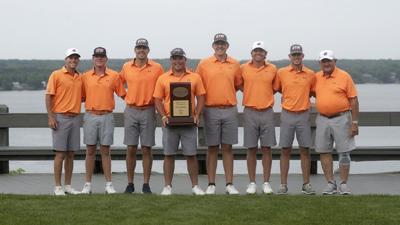 MUSCLE SHOALS, Ala. - After grabbing the 36-hole lead on Monday, UT Martin kept the margin at two shots to win the 2021 Ohio Valley Conference Men’s Golf Championship at The Robert Trent Jones Golf Trail at The Shoals.

It marks the second title for UT Martin, joining a victory on the same course in 2016.

With the victory, UT Martin earned the OVC's automatic bid into the NCAA Championship. The 2021 field will be announced on Wednesday, May 5 at 1pm CT on the Golf Channel.

The NCAA Regionals will be held May 17-19 in Noblesville, Indiana; Tallahassee, Florida; Albuquerque, N.M.; Stillwater, Oklahoma; Kingston Springs, Tennessee and Cle Elum, Washington. Following the Regionals the National Championship will be held May 28 – June 2 at Grayhawk Golf Club in Scottsdale, Arizona.

UT Martin fell behind early in the third round but rebounded to lead by as many as seven shots at one point before the final margin of two shots. The Skyhawks finished at 861 (-3) while Belmont was at 863 (-1). It was the second-straight OVC runner-up finish for the Bruins. SIUE was third (+5) and followed closely by Tennessee Tech (+7) and Jacksonville State (+9). The finish was rounded out by Morehead State (+17), Austin Peay (+34), Eastern Kentucky (+38), Murray State (+45), Eastern Illinois (+66) and Tennessee State (+78).

Belmont senior Evan Davis, the OVC Player of the Year, and UT Martin redshirt senior Jack Story shared medalist honors with 54-hole totals of 204 (-12). Davis birdied the final two holes to grab a share of the honor. Because Story was a member of the winning team, Davis earns the automatic individual bid to play in the NCAA Regional. Davis is the second Belmont medalist, joining Jack Uselton in 2018, while Story is the fourth from UT Martin, joining Brendon Caballero (2015) and Hunter Richardson (2016 and 2017).