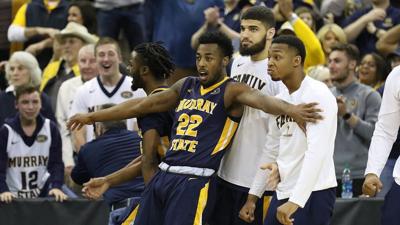 As we are days away from the start of the NCAA Tournament, teams that didn't make the tournament have a head start on reshaping their roster for next season. It's that time of year where players leave programs, whether by their choice or their coach's.

We expected there to be changes at Murray State after a 13-13 season. Today the first domino fell when junior guard Brion Whitley announced he will not be returning to Murray for his senior season.

Whitley started nine of the first ten games for the Racers, averaging about eight points and three rebounds per game while shooting north of 37% from three-point range.

In the last 16 games of the year, Whitley played more than three minutes just one time.

Part of Whitley's statement to Racer fans he posted on social media read: "I am writing this with tears in my eyes because you guys are my family and I have a passion for this program, but all great things must come to an end. thank you to much coaches, teammates, professors, and overall people of Murray over the last four years. You guys have helped me become the man I am today. I am excited for my journey and what life has before me. Honestly, I did not know what being a Racer meant before I came here, but now I will never forget."

So what's next for Murray State? If history is any indication with Head Coach Matt McMahon, there will not be any official announcements from the program if a player leaves for any reason. McMahon generally leaves that up to the player.

Murray State only had one senior on this year's roster and that was forward Devin Gilmore. The NCAA is giving every player an extra year of eligibility. Whether Gilmore use that remains to be seen.

As of now, McMahon only has Whitley's scholarship to fill for next season. we should know within the coming days if he will have more to fill.