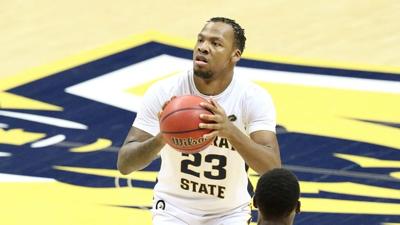 PADUCAH, KY -- The Murray State Racers continued their run of great basketball on Monday afternoon with a convincing 86-57 win over SIU Edwardsville.

The win was the Racers 4th straight, their longest of the season, and their sixth win in their last eight games moving them to 12-9 (9-7).

"I think for our team, a lot of the things that we value, our hard work, toughness, unselfishness, accountability, I think we have made huge strides in those areas," head coach Matt McMahon said. "The by-product of that is that you see a huge improvement on the court. Really, a lot of fun to watch, the unselfishness that our guys are playing with. Our 22 assists today to only eight turnovers, and was really proud of the team win."

KJ Williams was nearly unstoppable as he set another career high in points with 28, as well as another double-digit rebounding game with 14.

Tevin Brown carried over his hot shooting from Saturday's win against UT Martin, finishing 6-9 from three point range with 18 points. In the last two games, Brown is 12-18 from behind the arch.

Next up for the Racers, a home date against Eastern Illinois on Thursday night.